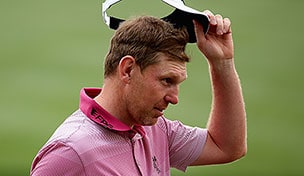 DUBAI, United Arab Emirates – Asked to grade the differences between his opening loop on Saturday at the Dubai Desert Classic and his final nine, Stephen Gallacher figured, “It was a four to a 10 (on a scale of 1 to 10).”

To be more specific, the Scot went out in even-par 35 with a bogey at the eighth and a birdie at the ninth, and scorched the Emirates Golf Club’s closing nine with seven birdies and an eagle for a 9-under 28.

“I struggled at the start to be honest, made bogey at the eighth and thought, oh well. From then on I didn’t miss a shot,” Gallacher said.

The defending champion birdied his first three after the turn and charged in an eagle putt at the 13th hole before closing with four consecutive birdies. His 9-under 63 vaulted Gallacher atop the leaderboard, two clear of world No. 6 Rory McIlroy.

“It was bizarre. It seemed every putt had the perfect line,” said Gallacher, who played with world No. 1 Tiger Woods and McIlroy for the first two days.

Gallacher is vying to become the first back-to-back champion of the Desert Classic and, in a nod to superstition, plans to wear the same clothes that he had on during last year’s final round in Dubai when he outdueled Richard Sterne – black shirt, grey pants.