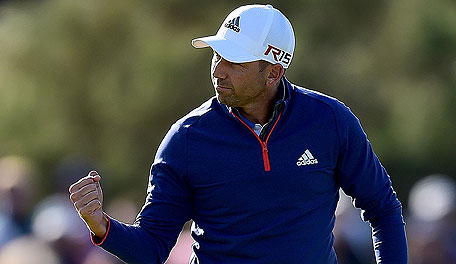 ST. ANDREWS, Scotland – Sergio Garcia’s major misses have been well documented. He’s had too many to count, but he’s also collected 10 top-five finishes in majors. Nearly half of those (four) have come in the Open Championship.

Last year was one of those years. Garcia shot a sensational final-round 66 to tie for second place with Rickie Fowler, two shots behind Rory McIlroy.

On Saturday at the Old Course, Garcia birdied three of his last five holes, including the final two, to shoot 69 and end two rounds at 5 under par. He’s five shots behind leader Dustin Johnson.

Garcia hit a laser approach into the Road Hole green (par-4 17th) and his ball hit the flagstick and stopped close, which led to an easy birdie.

“It was obviously very lucky,” Garcia said. “I guess the good thing was the ball was going straight at it.”

“I feel like I’m in a decent spot,” he said. “Obviously I would love to be a little bit higher, but I think that we fought well the first two days. Yesterday I didn’t feel amazing and I managed to keep it fairly good with the windy conditions and I finished it off well today. I’m very satisfied about that.”