Garrigus cards 66, leads by 3 in Tampa 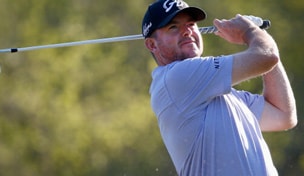 The leaderboard in Tampa remained bunched for much of the day Friday, but Robert Garrigus was able to pull away from the pack by late afternoon. Here's how things look after two rounds of the Valspar Championship, where Garrigus leads by three shots as he looks for a second career PGA Tour victory:

What it means: Garrigus lost in a playoff on the Copperhead Course in 2012, but two years later he's halfway toward improving on that runner-up finish. He'll look to remain in front Saturday over a group of contenders that includes Na, suddenly resurgent after battling injury, and Rose, looking to win for the first time since claiming the U.S. Open at Merion last summer.

Round of the day: Garrigus began the day one shot off the pace, but played his way to the top of the leaderboard thanks to a round that included six birdies. The 36-year-old had a trio of circles on his front-nine card, then added three birdies across a five-hole stretch from Nos. 11-15. His 5-under 66 was the lowest score of the day - and thus far, the week - by two shots.

Best of the rest: Na missed much of the 2013 season due to an injury, but since returning to action in October he has shown signs of the form that had him ranked among the top 50 players in the world in 2012. Na carded a bogey-free 68 Friday to move into second place behind Garrigus, in position to add to a string of high finishes this season that includes a T-3 at the Frys.com Open and a T-4 at the AT&T Pebble Beach National Pro-Am.

Biggest disappointment: A runner-up last week in Puerto Rico, Danny Lee appeared headed for another good week after opening with a 68 Thursday to hold a share of the 18-hole lead. The Kiwi backed up in a big way Friday, though, carding an 8-over 79 to make the dubious drop from a share of the lead to a missed cut in the course of about five hours. Lee's birdie on the opening hole was his only one of the day, as he added seven bogeys and a double bogey before slamming the trunk.

Main storyline heading into Saturday: Garrigus has had a number of close calls over the years, but his win at Disney to close out the 2010 season still serves as his only PGA Tour triumph to date. In order to add to that haul, he'll need to continue to capitalize on his length advantage off the tee on a Copperhead Course that remains eager to punish even the slightest error. While many near the top of the leaderboard are not yet in the field for the Masters and could punch a ticket to Augusta with a win, the two biggest names among the 36-hole contenders are Rose and Furyk, a winner here in 2010 who, like Garrigus, lost to Luke Donald in a four-man playoff here in 2012.

Shot of the day: Harris English moved back into contention thanks to a 2-under 69 Friday, a score that was largely sparked by an eagle at the par-5 11th. English stood 255 yards away in the right center of the fairway but carved his lengthy approach around a myriad of greenside bunkers and watched as it rolled to within four feet. The kick-in eagle took him to 3 under for the round and English will tee off Saturday at 1-under 141, six shots off the pace.