Garrigus finds himself in contention at Valspar again 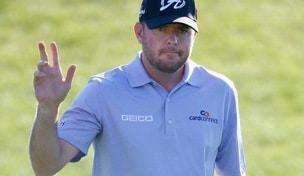 But for the second time in three years, Garrigus finds himself challenging for the title at the Valspar Championship.

For a player who says he has spent “half my life in the trees,” Garrigus has managed to carve up the Copperhead Course. On Friday, he birdied all four par 5s and is 8 under on the long holes this week.

More important than any big bombs off the tee, though, was his work on the greens; the 2010 Disney champion is ranked eighth this week in strokes gained-putting.

The flat stick has helped Garrigus curb a recent stretch of mediocre play. He hasn’t posted a top 10 since last year’s Match Play while falling to No. 104 in the world.

“I don’t know what the weekend holds,” he said, “but if I can keep putting like this it’s going to be a lot of fun.”