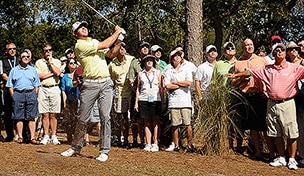 Getty Images
<a href='https://www.instagram.com/p/BEmPOtawuxE/?taken-by=rickiefowler&hl=en' target='_blank'>@rickiefowler</a>: So I woke up from a dream called #SB2K16 this morning...it was epic and will be hard to out do but we will definitely try! Enjoyed it boys @smyliekaufman10 @jordanspieth @justinthomas34 and great photo skills @peterwhalen  -

PALM HARBOR, Fla. – Robert Garrigus was thoroughly enjoying the par 5s this week at Innisbrook’s Copperhead Course. That is, until he drew the first bad time of his career.

The leader at the Valspar Championship birdied the first 10 par 5s he played this week. His streak came to an end Saturday at the 11th hole, where he missed an 8-foot birdie putt, and it didn’t get any better on No. 14.

After his drive found the left rough, he hit a “bullet 3-wood” that caught a tree branch and came down 75 yards short of the green. “If it misses that tree,” he said, “I hit it to about 5 feet.”

Instead, his ball came to rest in 5-inch crabgrass and he walked up to the green to assess his options. That apparently was the wrong move, because Garrigus, whose group was already on the clock, took longer than 40 seconds to play his shot and was hit with the first bad time of his career. Fortunately for him, a player can be penalized only if he has two bad times during a round.

“I started laughing,” he said afterward. “I looked at (the rules official) like, ‘I’m going to have words with you after,’ just messing around with him. It didn’t really matter. I’m not going to get another one. It’s not a big deal.”

Garrigus needed to make a 15-footer just to save par on the par 5. He settled for a Saturday 70 and 8-under 205 total, one shot clear of Kevin Na.