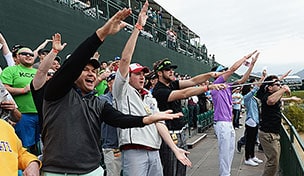 Getty Images
Jamie Donaldson of Wales and Tiger Woods of the United States walk up the fifth hole during the second round of the 2015 Masters Tournament at Augusta National Golf Club on April 10, 2015 in Augusta, Georgia. (Photo by David Cannon/Getty Images)  -

SCOTTSDALE, Ariz. – Last year, Robert Garrigus got a firsthand look at the final caddie race inside the stadium 16th hole of TPC Scottsdale when his looper, Brent Henley, raced his brother Kip, who caddies for Brian Gay.

But they never said anything about player races.

And so on Friday afternoon, Garrigus and playing partner Morgan Hoffmann raced each other to the 16th green, stopping just before they reached it – all to raucous applause from the boisterous gallery.

They said no caddie races, so we were like, alright, player races,” said Hoffmann, who bought into Garrigus’ idea about eight holes earlier. “We thought it would be kind of cool.”

“[Henley] singlehandedly took down the caddie races himself, so I figure I could start up the player races,” Garrigus added. “It was fun. The people out there, I’m sure they’ve been drinking all day. They’re a little intoxicated. But that’s alright. That hole is fun. I’ve always enjoyed it.”

Prior to the week, there was talk about what the repercussions would be from Ponte Vedra Beach headquarters if two caddies ignored the new policy. Garrigus and Hoffmann didn’t seem too concerned about receiving any kind of punishment, though.

“They never instructed us not to,” Hoffmann explained. “I don’t think it’s that dangerous. Players don’t have bags on their backs. Caddies have so much to deal with, so I think we’ll be alright.”