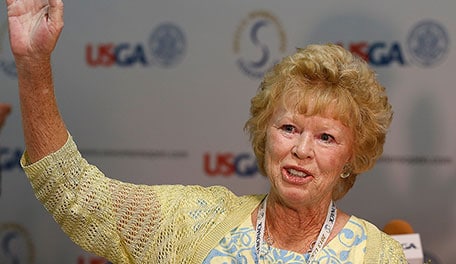 LANCASTER, Pa. – Rhonda Glenn’s media legacy with the USGA lives on this week.

Glenn, a USGA historian and tireless promoter of women’s golf, was honored in a media function in downtown Lancaster during the U.S. Women’s Open, where media took turns toasting Glenn, who died in February at 68. She had a multi-faceted media career. She was ESPN’s first female anchor and a women’s golf analyst for ABC before going to work in 1996 with the USGA, where she was manager of communications and chronicled the women’s game before retiring in 2013.

“For the 27 years that I've been out here, Rhonda was my go-to person in women's golf,” Golf Digest senior writer Ron Sirak said as part of his toast. “She was the weather vane that told me which way the wind was blowing when it came to players and issues. What made her special was that she was not only knowledgeable but also generous with that knowledge.”

Sirak is past president of the Golf Writers Association of America. Dozens of USGA and media members gathered to honor Glenn’s memory in an event sponsored by Steinman Communications at The Pressroom Restaurant.

Glenn wrote eight books about golf, and she was collaborating with Nancy Lopez on a book about Lopez’s life when Glenn died. While Glenn was very near finishing the manuscript, Lisa Mickey has stepped in to edit and complete the final project. The book is planned to be titled Nancy: The Course Of My Life. There’s no publication date yet.