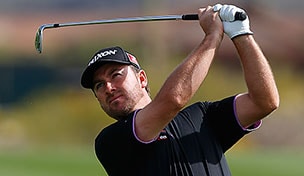 Getty Images
LAS VEGAS, NV - OCTOBER 24: Ollie Schniederjans plays a shot from a bunker on the 15th hole during the third round of the Shriners Hospitals For Children Open on October 24, 2015 at TPC Summerlin in Las Vegas, Nevada. (Photo by Scott Halleran/Getty Images)  -

This year, there will be two match-play events staged between opposing teams from Europe and Asia. According to Northern Ireland's Graeme McDowell, that's one too many.

While the Royal Trophy is annually contested between the two continents each December, this month will mark the first installment of the EurAsia Cup, which will make its debut March 27-29 in Malaysia. McDowell will tee it up in the inaugural event for Team Europe, and believes that a choice must be made between the two tournaments.

"I think one of the two matches has to stake its claim to be our equivalent of the Presidents Cup," McDowell wrote as part of a blog post for BBC. "It would be fantastic, in a non-Ryder Cup year, to have a really good, strong Europe versus Asia match, and I don't believe there is room for two of them."

Achieving a consensus among the various organizations involved, though, may be easier said than done. While the European Tour and Asian Tour co-sanction the EurAsia Cup, the Royal Trophy is jointly supported by the Japan Golf Tour, China Golf Association and OneAsia, which stands as the primary rival to the Asian Tour.

The rift between the two events runs deeper still due to the involvement of one of European golf's biggest names. The Royal Trophy was launched in 2006 thanks to efforts by the late Seve Ballesteros, who put his name behind the event and captained the first European squad with a vision of growing the game in Asia.

While the European Tour sanctioned the first two editions of the event, Tour officials later dropped their support over what chief executive George O'Grady termed "fundamental differences of policy with promoters." Ballesteros died from brain cancer in 2011.

When the European Tour announced the launch of the EurAsia Cup late last year, it claimed to have the support of the Ballesteros family. Those claims were vehemently denied by Ivan Ballesteros, nephew to the five-time champion and managing director of the Royal Trophy, and a bitter war of words ensued between the two parties.

O'Grady recently apologized for saying late last year that "Seve would have cherished" the new event, and letters from Ballesteros shortly before his death emerged last week indicating the Spaniard was against the prospect of a new tournament and sought instead to unify support for the Royal Trophy.

While McDowell noted that the divide between the two events is "a touchy subject, and one that is difficult to reconcile," he explained that a scheduling preference led him to add the EurAsia Cup to his 2014 slate heading into the season's first major.

"From my point of view, the EurAsia Cup sits very well. I didn't fancy either of the PGA Tour's Texas tournaments, one of which runs in late March (Valero Texas Open) and the other in early April (Shell Houston Open). But at the same time, I wanted to make sure I played in the fortnight before the Masters," he wrote. "So why not enjoy three days of team golf, keep my game sharp and spend some time with some of the European boys? I'll get to see Ryder Cup captain Paul McGinley there and really get the juices flowing."