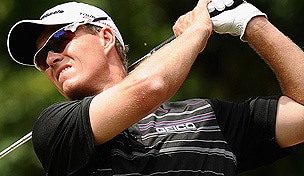 Getty Images
Rory McIlroy seized control of the tournament on Saturday, firing a course-record 61 to take a four-shot lead. Then on Sunday he closed with a 3-under 69 to finish at 21-under 267, bettering the tournament record by five strokes. His seven-shot margin over Webb Simpson and Patrick Rodgers represented his second win in
three weeks.
-

PALM HARBOR, Fla. – The Florida swing has never been tougher.

With John Senden’s 7-under 277 total here at the Valspar Championship, it marked the third consecutive tournament that the winning score was single digits under par.

The last time there were three consecutive single-digit under-par winners, excluding majors? That’d be 1990, when Payne Stewart (-8), Greg Norman (even) and Ben Crenshaw (-8) ran off three in a row. You’d have to go even further back – to 1983 – to find a stretch where no winner reached double digits under par in three consecutive weeks.

It’s also the first time that the first three legs of the Florida swing failed to produce a double-digit under-par winner. Russell Henley won the Honda at 8 under, while Patrick Reed triumphed at Doral at 4 under.