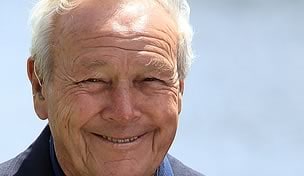 Beginning Sunday, April 13, Golf Channel will air a three-part primetime television event that explores the career and legacy of one of the game's greatest icons: Arnold Palmer.

Spanning the life of Palmer from his early childhood through his Hall-of-Fame career, Arnie is the product of spending the last year traveling with seven-time major champion, along with interviews from more than 100 people. Golf Channel also sifted through hundreds of hours of film archives - including several hours of never-before-seen Palmer family video - to create television's definitive story of the most influential man to ever pick up a golf club.

The three-part series will debut with "Arnie & His Army" at 10 p.m. ET April 13, following the conclusion of "Live From the Masters. The final two parts will air across the subsequent two nights: "Arnie & His Majors" on Monday, April 14 and "Arnie & His Legacy" on Tuesday, April 15.

"Mr. Palmer is an American icon, but what makes him so special is that he is absolutely genuine, especially through his ability to truly connect with everyone he meets," said Mike McCarley, president of Golf Channel. "To document the full impact of his life and legacy would be virtually impossible; however this project is an ambitious attempt to capture the influence he has in golf and sports as part of popular culture.