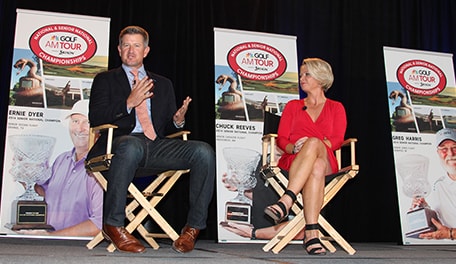 LA QUINTA, Calif. – Five of the six defending champions in the senior division of the Golf Channel Am Tour are back to defend their titles.

Let the shootout begin. The tournament, a 72-hole stroke-play competition from Sept 25-28 at The Club at PGA West, kicked off with a silent auction and gala dinner Thursday night hosted by Golf Channel Travel Insider Matt Ginella and Golf Central anchor Lisa Cornwell.

Ginella warned the players in attendance about the challenges that lie ahead. Several hundred golfers ranging in age from 50 to 82 will compete on the Greg Norman Resort Course, the Nicklaus Tournament Course, the Arnold Palmer private course and the TPC Stadium Resort Course. The Nicklaus Tournament and TPC Stadium courses will host the 2016 CareerBuilder Challenge of the PGA TOUR.

It’s improbable that anybody can match the 59 David Duval shot on the Palmer course at the 1999 Bob Hope Chrysler Classic. “If you watch golf, you will recognize some of the holes. That’s always fun,” Ginella said.

The Stadium course, a long-time host of the old Q-School, remains one of the feared tests of golf. “I would move up a set of tees when nobody is looking,” Ginella said, drawing laughs from the crowd.

During the ceremony Ginella and Cornwell shared their stories about why they love the game.

Cornwell, at age 16, was one of the country’s highest ranked female amateurs, taking lessons from David Leadbetter. “It was all downhill from there,” she joked.

Ginella worked at Sports Illustrated and Golf Digest before being hired at Golf Channel. “If you take golf out of my life, I have nothing,” Ginella said.

Ginella and Cornwell thanked the players for helping to raise $116,064 for the Am Tour's designated charity - David Feherty’s Troops First Foundation, a non-profit organization that develops, operates and supports initiatives to benefit today's military personnel.