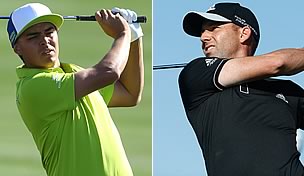 Getty Images
Images from behind the scenes of the 2015 Long Drive Championship in Thackerville, Oklahoma.  -

Facing off Friday in the third round of the WGC-Accenture Match Play Championship, Sergio Garcia and Rickie Fowler authored one of the more bizarre chapters in the event's history.

While both combatants faced par putts on the par-4  on the seventh hole at Dove Mountain, Garcia's was much closer to the hole: just over 4 feet, while Fowler's putt measured nearly 18 feet. Despite the difference in distance, Garcia unexpectedly offered to go "good-good," and the hole was halved when both putts were conceded.

The gesture appeared to stun Fowler, who continued to line up his putt before ultimately pocketing his marker. According to on-course reports, Garcia "felt bad" that he had taken too long on the previous hole, when he needed a ruling after his ball was surrounded by bees near the sixth green.

Despite the concession, Garcia left the seventh green with a 2-up advantage and won the next hole to grow his lead to 3 up. Fowler trimmed the deficit over the next two holes, though, and the gesture ultimately cost Garcia dearly as Fowler ultimately won the match, 1 up, after closing with a birdie on the final hole.

Watch full video below, as the Spaniard makes a concession more generous than anything seen during a typical $5 Nassau: