Goosen jumps into contention with sizzling 64 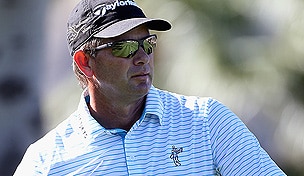 PALM HARBOR, Fla. – Pain-free for the past year and a half, Retief Goosen finally can focus on trying to return to championship form.

The two-time U.S. Open champion went from the cut line to contention here at the Valspar Championship, where a bogey-free 64 moved him just three shots off the lead with leader Robert Garrigus about three hours from his third-round tee time.

Goosen underwent disc replacement surgery in August 2012, fearful that his career might be over. He returned to competition a few months later, but apparently too quickly, as he developed a fracture in his back and was sidelined for another four months.

The 45-year-old tied for eighth at this year’s Sony Open, but that’s his only finish inside the top 45 in nine starts this season.

“My body feels good; the back feels great,” he said Saturday. “I just have to keep the confidence going and trust yourself out there.”

It always helps to return to Innisbrook’s Copperhead Course, where he won in both 2003 and 2009, which marks his last victory on Tour.

On Saturday, Goosen, who made the cut at 3-over 145, began his third round with six consecutive pars before rattling off seven birdies in an 11-hole span.

“It was nice to finally see one go in,” he said. “After a while you hit so many putts and keep missing, missing, missing that you struggle to see in your mind a ball going in.”

Goosen chipped in for birdie on No. 16, the second-most difficult hole on the course, and then on 18 he got up-and-down from 53 yards to seal his 64, his lowest score on Tour since a 63 at the 2012 Canadian Open. Interestingly, he did not birdie any of the four par 5s Saturday, and he has only one birdie in 12 tries this week.

The best news for Goosen, of course, is that he’s pain-free and able to compete with the world’s best once again.

“It could have gone the other way,” he said. “I could have never played again or feel like I feel now. I even said to my wife before surgery: It’s so bad now I can’t play anymore. If surgery doesn’t work out I still can’t play, so it can only get better.”