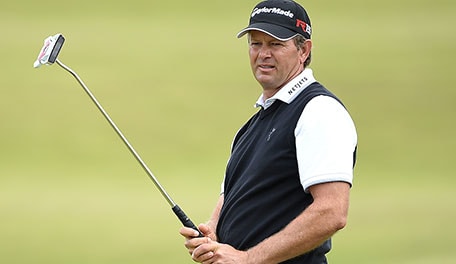 Sporadic showers created soft scoring conditions at Robert Trent Jones Golf Club, where several veterans were able to turn back the clock in the opening round of the Quicken Loans National. Here's how things look after the first day, as a pair of former Presidents Cup teammates share the lead:

What it means: A number of veterans were able to take advantage of a rain-soaked track, as Goosen, Els and Leonard - all of whom played the course in previous Presidents Cups - started strong. Goosen and Ishikawa edged ahead of the pack, but more than a dozen players opened with 66 or better.

Round of the day: Goosen has been revitalized this summer, and that trend continued with an 8-under 63 in the opening round. The South African carded eight birdies without dropping a shot, including four birdies in a six-hole stretch from Nos. 11-16 that sparked his inward half of 31.

Best of the rest: Ishikawa is still in search of his first win, but he vaulted into contention with a 63 that included a hole-in-one on No. 4. Ishikawa started on the back nine and reeled off five birdies in a row on Nos. 14-18, adding a sixth straight circle on No. 1. It's a season-low round for Ishikawa, who opened with a 64 at The Greenbrier earlier this month before finishing 76th.

Biggest disappointment: There were plenty of birdies available Thursday, but Jimmy Walker found only two of them en route to an even-par 71. One of only five players ranked in the top 50 among this week's field, Walker canceled his birdies with a pair of bogeys and now sits eight shots off the pace.

Main storyline heading into Friday: It will be interesting to see how the veterans near the top of the leaderboard fare, but all eyes will be on tournament host Tiger Woods, who salvaged his opening round after a shaky start. Woods bogeyed three of his first four holes, but rallied to post a 3-under 68 and remains in the mix after the opening round.

Shot of the day: Ishikawa offered a great highlight with his ace, but Rickie Fowler topped him with a walk-off hole-in-one. Fowler jarred a 7-iron from 184 yards on No. 9, his final hole of the day, to cap a 4-under 67.

Quote of the day: "I'm lucky to be out here. Three, four years ago my career looked like it was at an end with my back problems." - Goosen