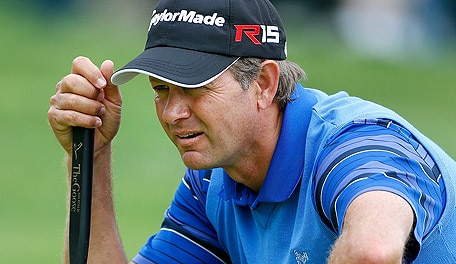 GAINESVILLE, Va. – Just a few years ago, Retief Goosen's back was so bad he couldn't walk and didn't know if he would be able to play golf again.

Thursday at Robert Trent Jones Golf Club, Goosen played like his old self with eight birdies and no bogeys for an 8-under 63 and a share of the early lead at the Quicken Loans National with Ryo Ishikawa.

"I hit a few bad drives on the par 5s, but had a lot of birdie chances out there," Goosen said. "I missed one green in regulation and got that up and down on 12, so it was a solid round of golf."

And it came at a good time. Goosen is No. 116 on the FedEx Cup points list and the top 125 qualify for the first playoff event at the Barclays.

At 46 years old, the two-time U.S. Open champion said his nerves "are probably not handling it so well anymore," but he's had a new lease on life since major back surgery in 2012 and more than eight months of recovery.

"I'm lucky to be out here," he said. "Three, four years ago my career looked like it was at an end with my back problems ... The back surgery has really turned my life around in general, not necessarily golf."

Goosen hasn't won since the 2009 Transitions (now the Valspar) in Tampa, but he has plenty of good memories at RTJ. He defeated tournament host Tiger Woods at the 2005 Presidents Cup in their singles match, 2 and 1.