Grace back in major mix after 64 at PGA Championship 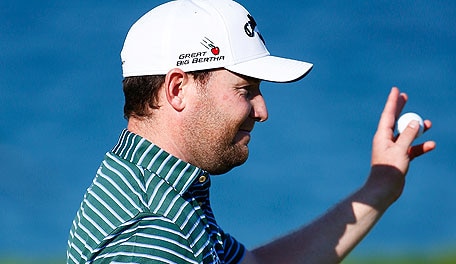 SHEBOYGAN, Wis. – “Get up!” fans yelled at Branden Grace’s ball as it approached the 18th green Saturday at Whistling Straits.

It never made it, landing short in a bunker.

“Get in!” they yelled as his ball splashed out and ran toward the hole. This time, it made it.

Grace was in a shootout with playing competitor Martin Kaymer in the third round of the PGA Championship, and he prevailed with a hole-out for birdie at the last. Grace shot 8-under 64 to Kaymer's 65.

Grace is now at 12 under par, three shots behind 54-hole leader Jason Day. Kaymer is at 11 under.

“We definitely fed off of each other,” Grace said. “I think that we both played some great golf today. I think we both made one or two mistakes around the turn or on the back nine with a couple of wayward shots, but we got lucky, which you need on a day like today and on a round like that. And to keep the bogeys off the scorecard.”

Grace will now try to do what he was unable to accomplish two months ago at the U.S. Open. He was tied for the lead at Chambers Bay through 69 holes but hit his tee shot out of bounds on the par-4 16th. He finished tied for fourth.

“I'm as excited as can be. It's another chance,” Grace said. “This is what we all play for. We all play to give ourselves the opportunity to get close to a major championship and we're all here for the same reason – we want to win this thing.”