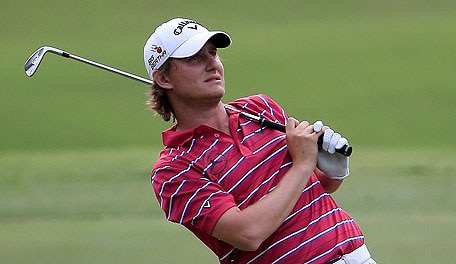 Emiliano Grillo shot a bogey-free 8-under 64 Thursday to take the lead through Round 1 at the RBC Canadian Open. Here’s how things started off north of the border at Glen Abbey Golf Club in Ontario:

What it means: Grillo is in search of his first PGA Tour win after coming up short in a playoff earlier this year at the Puerto Rico Open, played opposite the WGC-Cadillac at Doral. Split between the PGA and European tours, the 22-year-old Argentine has five top-10 finishes this year in Puerto Rico, China, Qatar, Spain and Alabama, where he finished tied for 10th last week at the Barbasol Chamionship, allowing him access to this week’s field in Canada.

Round of the day: Grillo made four birdies on each side and didn’t drop a shot all day en route to his lowest career round on Tour.

Best of the rest: Harman and Taylor both turned in 65s with eight birdies and a lone bogey, but perhaps more impressive was a first-round 66 from 17-year-old Australian amateur Ryan Ruffels. Making his first PGA Tour start, Ruffels has finished in the top 25 at the Australian Open each of the last two years. You may best know him for receiving a phone call from Phil Mickelson last fall.

Biggest disappointment: Robert Allenby got in a mid-round argument with his caddie, had a fan carry his clubs on his second nine and posted a 9-over 81, the worst round of the day. Allenby later withdrew from the tournament.

Shot of the day: Jason Day’s approach from the left rough at the par-4 10th landed on the green, rolled left and found the bottom of the cup for an eagle-2.

Biggest storyline heading into Friday: Three of the top 10 players in the world – Day, Bubba Watson, and Jim Furyk – are in the field this week at Glen Abbey. All three sit four shots back thanks to opening 68s.