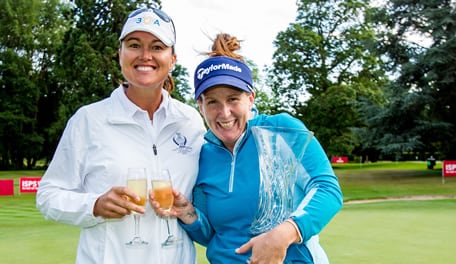 Sophie Gustafson blurted out her frustration to friends.

Gustafson, Felicity Johnson and Beth Allen were sitting in a bar in Hainan, China, consoling each other after all three missed the cut this spring at the World Ladies Championship on the Ladies European Tour.

“I’m not sure I want to do this anymore,” Gustafson told them.

Shooting 80 and 81 in China were hard numbers for Gustafson, who was the Ladies European Tour Player of the Year three times and competed on eight European Solheim Cup teams. She won 16 LET events and five LPGA titles, but she has been struggling as a player for a few years now. Knowing how Gustafson loves the game, Johnson and Allen asked what she would do if she weren’t playing.

“I’ve always wanted to caddie, so maybe I’ll do that,” Gustafson, 41, told them.

Allen, an American playing the LET, piped up immediately. She told Gustafson she would gladly hire her. Little did they know they would win the first time they actually teamed up.

When Allen, 34, won the ISPS Handa Ladies European Masters Sunday for her first LET title, Gustafson was on her bag.

“Caddying for Beth was great fun,” Gustafson wrote in email exchange with GolfChannel.com. “She hit it so good! I could just call the shots and she would hit them.”

Gustafson said Allen patiently waited until Gustafson was actually ready to become her caddie. It proved worth the wait for both of them.

“I have to say that not one time did I wish it was me hitting the shot,” Gustafson wrote. “It was nice being in the action without having my heart outside my chest. I was so much more relaxed being on the bag than being the one hitting the shots. Not that I wasn't nervous. I was towards the end, but nothing like I was when I was playing. Being able to help her out and get her over the line was really satisfying. Giving her tidbits of inside Sunday afternoon knowledge was real fun, and then to see her use that was even better.

“I know what a player feels and thinks in a situation like that, and I have a good idea what a player needs. I think it helped that Beth and I are a bit similar in our wording and humor, too.”

While the term courageous is too easily used to describe athletes, Allen and Gustafson qualify for what they’ve sacrificed or overcome. Allen donated a kidney to her brother, Dan, four years ago. Gustafson won the Golf Writers Association of America’s Ben Hogan Award for the manner in which she has battled a severe stutter while excelling in the game.

Gustafson is committed to help Allen for three more events, but she also continues to work on her own game.

“I'm going to work the Scottish, British and Prague (events), and then we'll see,” Gustafson wrote. “We obviously work well together, so I don't think that will be an issue, but I might want to play the Swedish tournament we have here on the LET in September. After that, who knows?

“I'm just taking it a little bit at a time right now. No reason to make a firm decision, I feel. If I feel I want to play again, I have that luxury being a life member on the LET. At the moment, I also have my all-time money status on the LPGA that I can use if I feel I want to come back there. If I do that, though, it's a commitment. The LPGA won't let you switch between being a player and caddie during the same year.”

Gustafson manages to find new ways to enjoy the game, even as she works through the challenges to her own game. She is a vice captain to Carin Koch for the Europeans at this year’s Solheim Cup. She has also been playing as a left-hander, just for fun, when she’s not working on her right-handed swing. Ping set Gustafson up with a left-handed set of clubs two years ago.

“I really enjoy it,” Gustafson said. “It's fun seeing the improvement. I'm down to a 20 handicap.”

For all the fans Gustafson has won over the years, there is delight seeing her find ways to continue to enjoy the game. 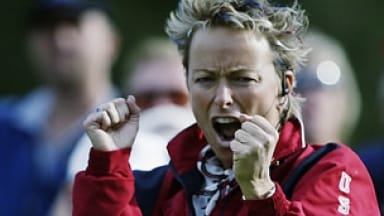 Red, white and you

After controversial comments five years ago, Dottie Pepper was welcomed back into the U.S. Solheim Cup fold.