Guthrie on Tiger WD: No reason to chance it 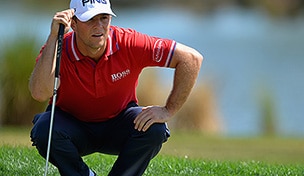 Getty Images
Rory McIlroy of Northern Ireland is pictured on the sixth hole during practice for the 2016 Omega Dubai Desert Classic on the Majlis Course at the Emirates Golf Club on February 1, 2016 in Dubai, United Arab Emirates. (Photo by Andrew Redington/Getty Images)  -

PALM BEACH GARDENS, Fla. – Luke Guthrie carded a pedantic 2-over 72 Sunday to close out the Honda Classic. Following his round, he was surrounded by more media members than would typically trail a player who just fell back to the middle of the pack.

That’s what happens, though, when you play with Tiger Woods on the day when the world No. 1 calls it quits after 13 holes.

Guthrie was paired with Woods for 31 holes across two days this weekend, and the 24-year-old had a front row seat for Woods’ struggle Sunday, when he played 13 holes in 5 over before withdrawing because of back pain. From Guthrie’s vantage point, the reason seemed legitimate.

“Obviously I kind of noticed that he wasn’t feeling the greatest out there,” said Guthrie. “I noticed he was starting to kind of gingerly tee up the ball and pick the ball out of the hole and stuff.”

After holing out for par on No. 13, Woods came up to Guthrie and informed him of his decision to withdraw. The pair shook hands before the 14-time major champion hopped in a nearby van and headed to the parking lot.

“He just came over and said that, ‘I can’t go anymore, it was a pleasure playing with you,’” Guthrie explained. “I just said, ‘Take it easy, feel better.’ Pretty unofficial, uneventful.”

While questions will circle now as to the health of Woods, Guthrie made it clear that his decision to withdraw made sense if the 38-year-old is injured.

“If you’re hurting, you’re hurting,” he added. “You don’t need to risk injuring yourself even more. He’s had his share of problems with injuries. There’s no reason for him to chance it if he’s really hurting.”