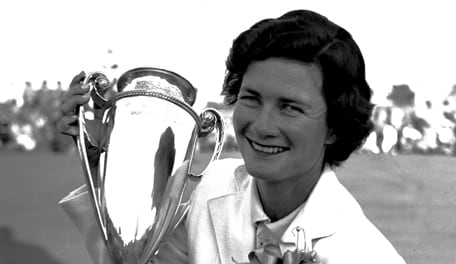 Louise Suggs, one of the giant talents and mighty spirits in women’s golf, died Friday. She was 91.

The winner of 61 LPGA titles, 11 of them major championships, Suggs was more than one of the greatest players in the history of the women’s game. She was one of its most important pioneers, a leader whose strong will was instrumental in laying the foundation of women’s professional golf.

One of the LPGA’s original 13 founders, Suggs helped create the tour in 1950 and was one of the six inaugural inductees into the LPGA Hall of Fame. She served as the LPGA president from 1955-57. The LPGA’s Rookie of the Year Award is named after her.

The honors kept rolling in for Suggs, long after she retired from the game. Earlier this year, she was named one of the first seven women the Royal & Ancient Golf Club admitted as members, ending that organization’s 260 years of exclusive male membership.

Photos: Louise Suggs through the years

Born Mae Louise Suggs in Atlanta on Sept. 7, 1923, she started playing golf at 10 years old when her father first put a club in her hands. Her father, John, was a former pitcher for the New York Yankees who built, owned and managed a golf course in Lithia Springs, Ga.

“By the time I was 15 years old, I had gone slightly nutty about golf and was spending every minute on the golf course,” Suggs once said.

By 16, Suggs was the Georgia State Amateur champion. She would go on to dominate the women’s amateur ranks, garnering much attention in 1946 when she won the Titleholders and the Western Women’s Open, both of which were considered major championships at the time. She won the U.S. Women’s Amateur in 1947 and the British Ladies Amateur in ’48 before turning pro.

As feisty as she was skilled, Suggs made an impression just about wherever she played.

Ben Hogan marveled watching her play as his teammate in a “Pro-Lady” event before the Chicago Victory Open in in 1945.

“A model for any other woman aspiring to ideal golf form,” Hogan once wrote.

Sam Snead fumed after Suggs won the Royal Poinciana Invitational at the Palm Beach Golf Club’s par-3 course in 1961, beating a dozen male pros that included Snead. She did so from the same set of tees the men played.

“He didn’t like it very much,” Suggs once said. “He burned rubber on his car leaving the parking lot.”

Suggs’ peers were often bowled over by her competitive spirit.

“Louise was definitely one of the greats,” Betsy Rawls once said. “She had tremendous drive and was almost neurotic, like most of our great players who seemed to have a lot to prove. Winning was everything to her, and like Mickey Wright and Patty Berg, she couldn’t tolerate losing.”

Bob Hope, the actor/comedian, had a special name for Suggs. He called her “Miss Sluggs” after watching her slam long drives in an exhibition while playing alongside her.

One of the early stars of women’s golf, Suggs won the U.S. Women’s Open in 1949 by 14 shots. Babe Zaharias, who was Suggs’ bitter rival, was runner up. The margin of victory remains a U.S. Women’s Open record.

“Babe was a little upset after that,” Suggs said years later. “She said, ‘Are you sure you counted all your strokes?’ Oh, I did.”

“When I had someone down, I put my foot on her throat,” Suggs said.

Suggs named a beloved poodle “Damit” and used to drive a car with a specialty license plate that read: “Teed Off.” The feistiness evident captured the nature of the spirit that helped Suggs battle Zaharias and Berg in the LPGA’s early years.

“Someone once asked me whether Babe, Patty and I got together to figure out who was going to win each week,” Suggs once said. “My answer was, ‘Have you ever seen three cats fight over a plate of fish?’”

Suggs and Zaharias, the most famous female athlete of the time, were two of the greatest rivals in the history of women’s golf.

“I don’t think I ever got the recognition I deserved because of her,” Suggs said upon being inducted into the World Golf Hall of Fame in 1979. “She was so flamboyant, she put pressure on me. She was all fire and fall back and flail at it and grunt. But she was spectacular ... Course, I never had any trouble with Babe. She just spoke her mind and I’d speak mine and we’d go our way.”

As competitive as they were, Suggs, Zaharias and Berg teamed together to help build the LPGA. They barnstormed across the country from one golf tournament to the next, unsure what their future held. The founders did just about everything getting tournaments set up, from marking hazards, setting hole locations and managing pairings to scorekeeping. They did their own marketing, too, putting on teaching clinics and making appearances at everything from local minor league baseball games to local civic organization meetings.

“The girls on tour now, they don’t have any idea how hard it was,” Suggs once said.

Suggs’ 61 career LPGA titles rank fourth on the all-time list behind Kathy Whitworth (88), Mickey Wright (82) and Annika Sorenstam (72). Patty Berg  has 60 wins. Her 11 major championship titles rank third behind Berg (15) and Wright (13). Suggs won eight LPGA titles in 1953 and was the tour’s leading money winner that year. She also won the tour’s money title in 1960 and claimed the Vare Trophy for low scoring average in 1957.

Having grown up in Atlanta, Suggs used to watch fellow Georgian Bobby Jones practice. She said it helped her try to absorb his rhythm. Hogan noticed after playing with Suggs in that Pro-Lady event Chicago.

“The swing she showed in 1945 was a beautiful thing – so smooth and rhythmic, so soundly joined together – she was bound to be a winner,” Hogan once wrote. 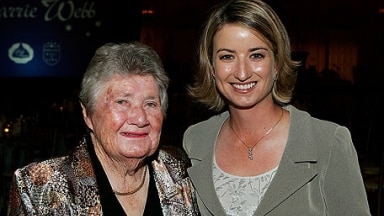 Karrie Webb established a close connection to Louise Suggs almost from the moment she joined the LPGA.