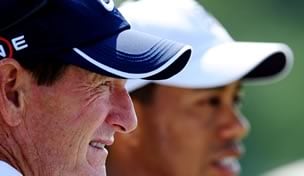 Getty Images
HUIXQUILUCAN, MEXICO - MARCH 21: Seon Hwa Lee of South Korea hits her tee shot on the 18th hole during the second round of the MasterCard Classic at the BosqueReal Country Club on March 21, 2009 in Huixquiucan, Mexico. (Photo by Scott Halleran/Getty Images)  -

While he was winning PGA Tour events - and major championships - at an unprecedented clip earlier in his career, Tiger Woods was credited with having one of the biggest intimidation factors in golf, if not all of sports.

Time and again, players would struggle alongside Woods while he wore his traditional Sunday red, often reduced from contenders to front-row spectators before reaching the back nine.

According to his former swing coach, though, Woods' ability to intimidate his opponents has been blown out of proportion over the years.

While Woods has stumbled out of the gates in 2014, he had no such issues from 2004-2010, when he crafted his swing under the tutelage of Haney. According to the 58-year-old instructor, the situation faced by many of Woods' opponents during his prime - playing near the lead on the weekend - often had more to do with players faltering down the stretch than did Woods' presence beside them on the tee box.

"Everyone says, 'Oh, he can't play with Tiger,'" he continued. "It's hard to play on the lead, and that's hard no matter what tournament it is and no matter who's playing."