Hanse's handiwork on display this week at Doral 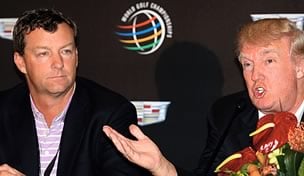 Getty Images
PACIFIC PALISADES, CA - FEBRUARY 21: Bubba Watson lines up a putt on the 15th hole during the final round of the Northern Trust Open at Riviera Country Club on February 21, 2016 in Pacific Palisades, California. (Photo by Harry How/Getty Images)
-

DORAL, Fla. – For Gil Hanse, the soft spoken architect who has been drawn into the media glare with his design projects in Brazil for the 2016 Olympics and Doral, his refuge awaited.

This week’s WGC-Cadillac Championship will be the unveiling of Hanse’s redesign of the Blue Monster and he hasn’t shrunk from the spotlight, answering questions from players, the press and, yes, the man himself, Donald Trump.

Luckily, Hanse’s duties as the architect of the redesigned Red Course at Doral called on Wednesday. “I will be on a bulldozer this afternoon shaping some greens. It’s where I go to relax,” he smiled.

Hanse and Trump’s handiwork on the Blue layout will assure players at this week’s World Golf Championship won’t relax. Along with the additional yardage – about 150 yards – and an assortment of new water hazards, the redesigned greens may be the most difficult adjustment for players.

“(Trump) heard comments from Tiger (Woods) that the greens were flat, so one of the things we wanted to do was to make sure there was some subtle character to them,” Hanse said.

Still, the pressure Hanse will face this week at Doral is nothing compared to what awaits him later this month when he returns to Brazil to continue construction of the Olympic course, which has been dogged by construction delays.

Hanse said he expects to start growing grass on the site by April and hopes to have the entire property grown in by the end of this year.

“Right now the key thing is we have target (dates) we have to hit,” Hanse said.

And if he needs any help moving things along in Rio, his famous partner at Doral has a history of meeting deadlines.