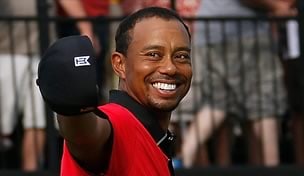 Getty Images
Dustin’s original inclination to the ground is very much in tact, showing no signs of unnecessary force to speed the club up. A perfectly balanced finish is the result. (Analysis: GCA lead coach Jason Sedan; photo: Fred Vuich; for more GCA Magazine, <a href="http://www.golfchannelacademy.com/" target="_blank">click here</a>)  -

Happy birthday to … me.

Or happy anniversary. Call it whatever you wish. Point is, I turned 2 years old today. Not me personally, but the @GCTigerTracker account.

Here are a few more fun facts that have happened during my reign:

• This week's WGC-Cadillac Championship is my 41st start with Tiger. This does not include the Ryder Cup, Presidents Cup, Jinsha matches vs. Rory McIlroy or the unofficial medal-match play event in Turkey in 2012.

• Two WDs during the span, oddly coming at the first event I covered and the last – 2012 Cadillac final round; 2014 Honda Classic final round.

• One MDF – this year at the Farmers Insurance Open.

• Sadly, it's easy to tally the major championship total during my infancy (and don't blame me, he was winless for four years in majors before I arrived on the scene).

• Best finish in a major championship was a third-place tie at the 2012 British Open.

That's it, and that's all. Other than the fact that Tiger Woods still doesn't follow me. Hey, but at least Lindsey Vonn does.