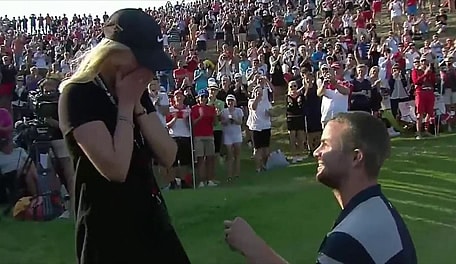 With large crowds surrounding the 16th green at the European Tour's Made in Denmark, Andreas Harto paused his round long enough to propose to his girlfriend.

After a birdie on No. 16, Harto drew his now-fiancee, Louise De Fries, out from the crowd on Himmerland Hill, the large area that surrounds the putting surface. He got down on one knee, produced a ring and received a hearty cheer when she accepted the offer:

Harto, 27, is from Copenhagen and made the most of a rare opportunity to play in front of a home crowd. His only other European Tour start this year came at the Madeira Islands Open, where he finished T-18.

Perhaps still dealing with some proposal-related nerves, Harto went on to bogey the next hole and will miss the cut after rounds of 73-74, but he and his fiancee left Himmerland Golf Resort & Spa with a proposal story for the ages.

This is not the first time we have seen a golfer drop to one knee this year. PGA Tour rookie Mark Hubbard proposed to his girlfriend behind the 18th green at Pebble Beach after completing his opening round at the AT&T Pebble Beach National Pro-Am.