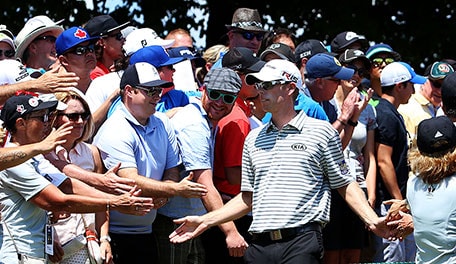 When his bunker shot on 18 came up eight feet short of the hole for eagle, David Hearn took a deep breath and exhaled, no doubt frustrated that he had become the latest Canadian to come up short in his national open. It's now 61 years and counting.

The day had started so promising.

Coming into the final round two shots clear of eventual champion Jason Day and Bubba Watson, Hearn got the home crowd at Glen Abbey Golf Club fired up with two opening birdies. But he quickly gave those shots back with bogeys on Nos. 3 and 7, and he only managed to birdie one of the three par 5s coming in to shoot even par.

Unfortunately for Hearn he had one more punch to the gut on 18 when his birdie putt spun around the hole, costing him a share of second place with Watson.

"I obviously had a wide range of emotions today," Hearn said. "I got off to a great start, and in the middle of the round, I just struggled a bit with hitting the quality shots I had been hitting all week."

Hearn's still trying to break through for his first win, but he's been knocking on the door this season. He lost in a playoff at the Greenbrier, and he's also recorded top-10s at the Shriners and New Orleans.

"It’s hard to win any tournament on the PGA Tour," he said. "For me, I’m getting a lot better and I’m closer to doing that. I’ve been real close a couple times this month. Hopefully I’ll break through soon. I would have loved to have done it in front of everybody and made everybody proud, but I’m sure everybody is still proud, and I certainly am. I’m proud of the way I played."