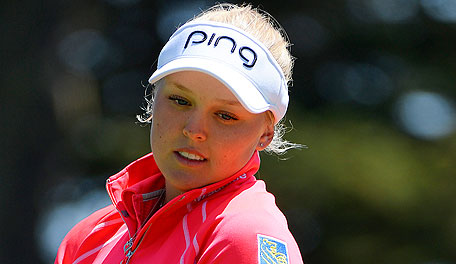 Brooke Henderson can play the rest of the year as a Symetra Tour member after winning Sunday’s Four Winds Invitational in South Bend, Ind.

After her victory, the 17-year-old Canadian petitioned the LPGA for a waiver of its rule requiring tour members be at least 18 years old. LPGA commissioner Mike Whan quickly granted the waiver, which allowed Henderson to claim Symetra Tour membership based on Sunday’s victory.

Henderson can now play Symetra Tour events out of Category C on that tour’s priority list. The $22,500 winner’s check she earned Sunday won’t count on the Symetra Tour money list, but her winnings the rest of the year will count. She’s planning to play the Symetra Tour’s Island Resort Championship this week in Harris, Mich.

The top 10 Symetra Tour money winners at year’s end earn a promotion to the LPGA. There are 12 Symetra Tour events remaining this year.

Henderson is seeking to gain LPGA membership without going to Q-School in the fall. She could do so by winning an LPGA event, and then gaining another waiver of the tour’s age rule, or she could do so by finishing this year with the equivalent of top-40 money winnings in LPGA events. The Symetra Tour membership now gives Henderson two more options to gain LPGA access. If she wins two more Symetra Tour events through the rest of this season, she earns promotion to the LPGA. If she finishes top 10 in money at season’s end, she also earns a promotion.