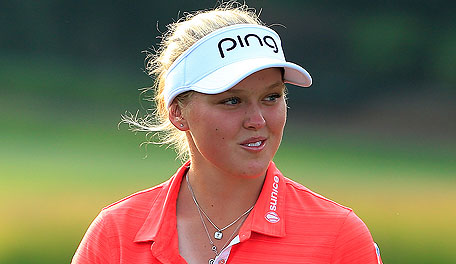 Brooke Henderson missed making it through the Monday qualifier at the Marathon Classic outside Toledo, Ohio, by one shot.

Henderson tied for fifth Sunday at the U.S. Women’s Open in Lancaster, Pa., and then drove to Ohio for the Monday qualifier. The LPGA doesn’t have a top-10 rule like the PGA Tour does, where a top-10 finish gains a player a spot in the following week’s event. Henderson is in this week’s field at the Symetra Tour’s Toyota Danielle Downey Classic in Rochester, N.Y. She earned Symetra Tour status winning the Four Winds Invitational earlier this summer.

Henderson is near sealing up LPGA membership. Her T-5 finish at the U.S. Women’s Open was a big deal because it came with $141,396 in earnings, pushing her LPGA non-member earnings this year to $458,866. If she were a tour member, she would rank 17th on LPGA money list. If Henderson can finish this season with earnings equal to or better than the LPGA pro who finishes 40th on the final money list, she will earn tour membership for 2016. Hee Young Park finished 40th on the money list last year with $447,658 in earnings. It should be noted LPGA pros are playing for more prize money this year.