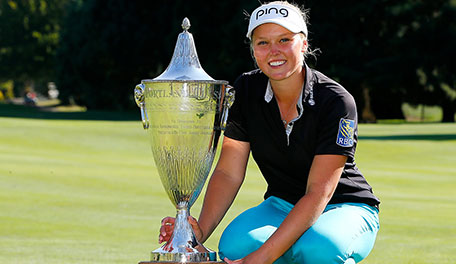 Following her breakthrough win at the Cambia Portland Classic, 17-year-old Brooke Henderson has decided to petition the LPGA for a waiver of its rule requiring all members to be at least 18 years old.

Henderson's agent, Kevin Hopkins, told GolfChannel.com's Randall Mell that the Canadian phenom will ask commissioner Mike Whan to waive the rule, which would allow her to become a full-fledged LPGA member immediately. Similar waivers have been granted to Lexi Thompson and Lydia Ko when they won before turning 18, and Mell reports that the family expects Whan to rule favorably on the waiver request as quickly as Tuesday.

Once granted membership, Henderson would be exempt through the end of next year thanks to her maiden victory.

Henderson is in the field this week at the Canadian Pacific Women's Open days after winning in Portland by eight shots, setting a new tournament scoring record in the process. Despite racking up seven top-25 finishes in 10 starts this season – including T-5 results at both the KPMG Women's PGA Championship and the U.S. Women's Open – Henderson has been relegated to Monday qualifiers this summer because of the Tour's age restriction.

Henderson turns 18 on Sept. 10, and she had been weighing the option of deferring her membership to next year because of the Rookie of the Year implications. Despite earning $661,264 in unofficial earnings this year, Henderson won't be able to carry that total over once becoming a member, meaning in the eyes of the LPGA she would have zero official earnings and zero points in the Rookie of the Year race once her waiver is granted.