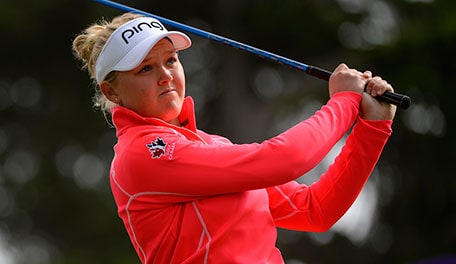 LANCASTER, Pa. – Brooke Henderson got a scare last week when the car she was driving was broadsided the day before she was scheduled to play a Symetra Tour event in Michigan.

Henderson was treated in a hospital for bruises to her left leg and spent three days in bed recuperating, forcing her to withdraw before the Tullymore Classic.

That’s not stopping the 17-year-old Canadian phenom from trying to win the U.S. Women’s Open this week. She told GolfChannel.com before heading out for a practice round Wednesday at Lancaster Country Club that she’s ready to play.

“I’m feeling really good,” Henderson said. “It was an interesting night, and I’m grateful to be here. It could have been much worse.”

Though Henderson only hit some range balls on Monday and played just nine warm-up holes on Tuesday, she looked good hitting balls on the range Wednesday before heading out for the practice round with her sister, Brittany, caddying for her.

“The golf course is beautiful,” Henderson said of Lancaster Country Club. “It’s going to be tough, a great test and a great challenge for everybody. You have to be smart here.”

Henderson tied for 10th at the U.S. Women’s Open at Pinehurst last year, which qualified her for a return to the championship this year. She’s coming off a tie for fifth at the KPMG Women’s PGA in her last LPGA start. She’s trying to earn LPGA membership this year playing tour events on sponsor exemptions, special invitations and via Monday qualifiers. In eight LPGA starts this season, she has earned $317,470. That would rank her 22nd on the LPGA money list if she were a tour member. That’s relevant because if she finishes this season with earnings that are equal to or better than the player who finishes 40th on the final money list, she will earn LPGA membership for 2016. As of now, Henderson is only assured two more LPGA starts this year, the Ricoh Women’s British Open in three weeks and the Canadian Pacific Women’s Open in five weeks.

Henderson can also earn LPGA membership by winning this week, provided she were to get a waiver of the LPGA rule requiring members to be 18. Henderson turns 18 on Sept. 10.

“I’m very confident,” Henderson said of the state of her game. “I’ve had some good finishes this year, and I feel like my game is right there.”

Henderson earned Symetra Tour status three weeks ago by winning the Four Winds Invitational. She can also earn a promotion to the LPGA if she wins two more Symetra Tour events or finishes among the top 10 on that tour’s final money list.

“This is an important week,” Henderson said. “I’m trying to take advantage of all my opportunities.”