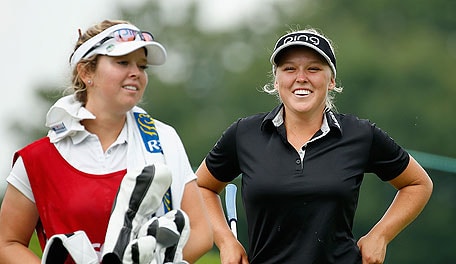 LANCASTER, Pa. – Brooke Henderson didn’t win the U.S. Women’s Open on Sunday, but the 17-year-old phenom from Canada delivered another clutch performance under pressure in a major.

With a 4-under-par 66, Henderson tied for fifth at Lancaster Country Club, taking her to the brink of securing LPGA membership for next year.

“It's exciting to know that I do have a chance to get my card for next year and to do something that a lot of people didn't believe was possible,” Henderson said. “So I'm very, very excited to be in the position I am.”

If Henderson can finish this season with earnings equal to or better than the LPGA pro who finishes 40th on the final money list, she will earn tour membership for 2016. Hee Young Park finished 40th on the money list last year with $447,658 in earnings. It should be noted LPGA pros are playing for more prize money this year.

Henderson plans to tee it up Monday at the Marathon Classic qualifier outside Toledo, Ohio, in a bid to win a spot in that event. She has a special invitation to play the Ricoh Women’s British Open in three weeks, the Canadian Pacific Women’s Open in late August and is now moving closer to becoming eligible for the Evian Championship based on her world ranking.