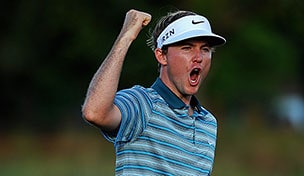 DORAL, Fla. – After his first career win, at last year’s Sony Open, came in his initial start as a PGA Tour rookie, Russell Henley admitted that it came as a surprise.

“I don't know that I was completely ready to deal with it the first time around,” he said. “Definitely wasn't expecting to win right out of the gate. So last time I won, I was so pumped up about getting into Augusta and just really wanted to go back home and celebrate. Now, this year, after winning, I want to try to get back in that situation again.”

Following his latest victory at the Honda Classic, where he defeated Rory McIlroy, Russell Knox and Ryan Palmer on the first extra hole, Henley expects to be more prepared to deal with the aftereffects.

“I'm more excited to keep playing golf and keep getting better, and I feel like I've got a little bit better direction that I'm going in right now,” he said in advance of this week’s WGC-Cadillac Championship. “I feel like I know what is going to make me better.

“A full year on Tour will teach you a lot about who you are and what you need to do with your game; what works, what doesn't work. I think a year of experience is huge for me. Golf is so hard that nobody knows for sure if they are going to keep anything going. I know I can control my work ethic and my attitude, and hopefully I can keep those consistent.”