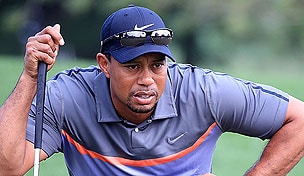 An HSBC chief wants Tiger Woods and other top players to keep the fourth and final World Golf Championships event of the year on their radar – never mind that the tournament won’t be played for another eight months.

Giles Morgan, HSBC’s global head of sponsorship, said that players need to “respect” the WGC-HSBC Champions rather than teeing it up elsewhere in cash-grab exhibitions.

“I do think the tours – and I think the tours are working on this – should make sure that there is respect to the tournaments,” Morgan said this week in advance of the LPGA event in Singapore, according to a report in the AFP. “As opposed to playing in meaningless … money-making opportunities around the World Golf Championships.

“It’s up to the tours to enforce the criteria to their membership. And we’ve expressed our position to the tours, which is that we know they can’t enforce their players to play and that’s fine, we understand that.

“But we do think that players need to be respectful of … these majors events (which) are really at the top and the pinnacle and the lifeblood of the sport. If you’ve got sponsors investing that level of money, the players should respect the calendar.”

The HSBC Champions, typically played in early November, is the richest tournament in Asia, boasting a $8.5 million purse. That still hasn’t been enough to lure Woods, who has skipped each of the past two events in favor of appearances in China.

Indeed, that’s been the most frustrating part for the sponsors. Last year, Woods was already in the country – for a one-day duel with Rory McIlroy – but decided to skip the WGC event. Adam Scott also missed last year’s event.

This strong stance is nothing new from Morgan, however. He made similar remarks in both 2012 and ’13 that, apparently, had little effect.

Perhaps it’s time for a new tactic. Calling out Woods in public – again – won’t help bring him back to the event.