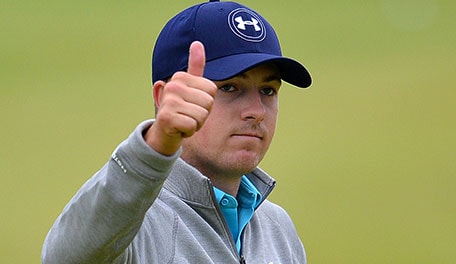 AKRON, Ohio – For the second time in as many starts, Jordan Spieth will tee off with his sights set on the top spot in the world rankings.

Spieth enters this week at No. 2 in the world, and with world No. 1 and defending WGC-Bridgestone Invitational champion Rory McIlroy sidelined with an ankle injury, the top spot is again up for grabs.

“It would be yet another dream come true for this year,” Spieth said. “At the beginning of the year, I wanted to work my way up the world rankings. I didn’t think I could be in this position or have this opportunity.”

Spieth started the year at No. 9 but has rocketed up the rankings thanks to a pair of majors among four total victories. He could have passed McIlroy with a win at the Open Championship, but merely closed the gap after finishing T-4, one shot out of a playoff.

As was the case at St. Andrews, Spieth would ascend to No. 1 with a win – and only a win – this week at Firestone Country Club. Potential scenarios for next week’s PGA Championship will depend on how Spieth fares this week and whether McIlroy will be able to tee it up, as his status remains day-to-day.

“Obviously, we all want Rory back ASAP. I saw the video he posted today, too, and it looks like he’s making tremendous progress. So hopefully he’s back soon,” Spieth said. “It would be really, really incredible at the end of this week if I was able to hold that trophy and have that position going forward.”