Infamous DJ bunker not in play at Whistling Straits 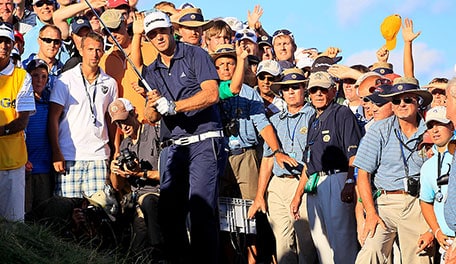 AKRON, Ohio – It appears Dustin Johnson will have one fewer obstacle to overcome next week when he returns to the sight of perhaps his biggest major heartbreak.

Johnson held a one-shot lead on the 72nd hole of the 2010 PGA Championship at Whistling Straits, and after holing out he expected to be in a playoff with Martin Kaymer and Bubba Watson. Instead, he was informed by a tournament official that he had inadvertently grounded his club in a small bunker before hitting his final approach, and the two-shot penalty dropped him into a tie for fifth.

The season’s final major is set to return to the lakeside layout next week, where Johnson will certainly be asked questions about letting the trophy slip through his fingers – especially after another 72nd-hole debacle this summer at Chambers Bay.

But Graeme McDowell played a practice round at Whistling Straits on Tuesday, and the Ulsterman indicated that Johnson won’t face the prospect of a repeat error in the area to the right of the final fairway.