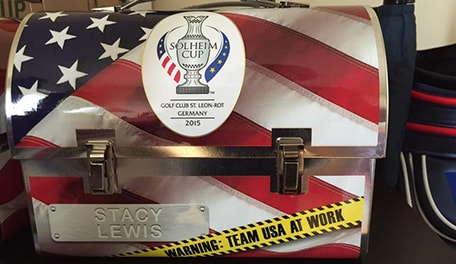 ST. LEON-ROT, Germany – For two years, Juli Inkster has been saying she wanted her American team to take their lunch boxes to the Solheim Cup, to take a blue-collar, workmanlike approach to winning it back.

When the United States’ team arrived at St. Leon-Rot Golf Club on Monday, Inkster gave each player a lunch bucket as a gift.

Players have been getting gifts every day in their hotel rooms. They also got Bose headphones this week.

The lunch box, though, was more symbolic than practical. It embodies the theme Inkster is taking into these matches. It also relates to her de-emphasis on face paint and excessive celebrations. To get the job done, she believes her players need to focus more on the way they play golf week to week, believing it will bring out their best.

“I think you get to a point where you're like, 'Well, what are we going to do? Try harder? What are we going to do? Care more?'” said American Angela Stanford. “We have the last two times, and it hasn't worked out. And I think that's what Juli has been about: 'You guys are trying so hard. You're not doing what you usually do.' So what are we going to do? Worry about it more? I think it's kind of one of those things that everybody is so done thinking about what's gone wrong that now it's like, 'Let's do something right.' It’s like we're just ready to win.”

Stanford said Inkster’s will to win is legendary.

“I got out off the bus last week (at Evian) to go warm up, and Juli’s like, 'Hey, let's play for dinner,'” Stanford said. “She’s always wanting to beat somebody.”

Inkster was asked Wednesday what would make this a successful week.