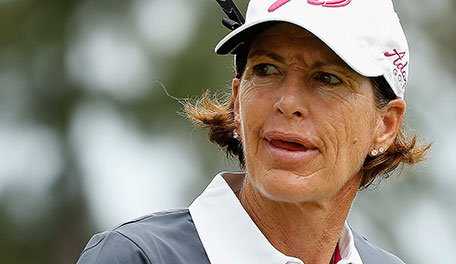 Getty Images
Tom Watson throws out the ceremonial first pitch prior to game two of the American League Championship Series between the Kansas City Royals and the Toronto Blue Jays at Kauffman Stadium on October 17, 2015 in Kansas City, Missouri. (Photo by Rob Carr/Getty Images)  -

Juli Inkster is already proving to be the ultimate grinder leading the U.S. Solheim Cup quest as captain.

She’s grinding over who might be her two captain’s picks and how injuries might affect her team’s makeup.

“I’m not sleeping much at night,” Inkster told Golf Channel’s Tom Abbott and Karen Stupples during Friday’s telecast of the Meijer Classic. “It’s a headache waiting to happen.”

With just four events remaining for Americans to qualify for the team, pressure’s ratcheting up on players and the captain. The team will be finalized at the conclusion of the Canadian Pacific Women’s Open on Aug. 23. The Solheim Cup matches are scheduled Sept. 18-20 at St. Leon-Rot Golf Club outside Heidelberg, Germany.

Inkster’s choices are complicated by some nagging injuries to players lining up to make the team. Michelle Wie has hip, knee and foot injuries; Jessica Korda an elbow injury and Lexi Thompson a wrist injury.

If the American team were settled today, all three of those players would be on the squad and all three would be dealing with questions over whether they could play 36 holes in a day. Cristie Kerr’s wrist injury in Ireland four years ago proved pivotal in Europe’s victory as she had to concede her singles match to Stupples in a tight competition that came down to the final singles match.

“I really need somebody who can play 36 holes,” Inkster said. “If you can’t play 36 holes, you really aren’t helping the team out. You might help the team in the singles matches, but you’ve got to rely on every one of them being able to play 36 holes every day.

“We’ll just have to see if they get healthy next month. We have four more tournaments the next month so that could do a lot of damage, too.”

As of this week, Stacy Lewis, Thompson, Wie, Cristie Kerr, Brittany Lincicome, Morgan Pressel, Angela Stanford and Gerina Piller would make the team on points. Paula Creamer and Korda would make it off the Rolex rankings list.

There will be double points at stake at next week’s Ricoh Women’s British Open.

What is Inkster looking for in a captain’s pick?

*The top eight in points at the conclusion of the Canadian Pacific Women’s Open (Aug. 23) earn automatic spots on the American team. A victory this week is worth 60 points, second place is worth 30, third 28.5, with points awarded down to 20th place (3 points). Majors are double points.

*The top two Americans in the Rolex women’s world rankings who aren’t already qualified on points automatically make the team.