It's been a 'surreal' week at Bay Hill for Fitzpatrick 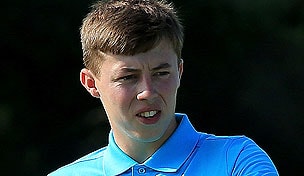 Getty Images
SAMMAMISH, WA - JUNE 10: Brooke Henderson of Canada hits her approach shot on the seventh hole during the second round of the KPMG Women's PGA Championship at the Sahalee Country Club on June 10, 2016 in Sammamish, Washington. (Photo by Jeff Gross/Getty Images)  -

ORLANDO, Fla. – U.S. Amateur champion Matt Fitzpatrick made headlines over the winter when he withdrew from Northwestern after just one semester – a decision, he said, that would allow him to focus full-time on golf.

Since January, he has worked on his game at home in England, played in the Sunningdale Foursomes and practiced for three weeks in sunny Arizona.

“It was taking a lot of time away from my golf,” he said Thursday after opening with 1-under 71 at Bay Hill. “School was part of the reason why I went there, but I really enjoyed my time.

“Fortunately and unfortunately, I had a good year last year, it opened up a lot of doors, and going to (college) would not have let me play in some of the events.”

After winning the U.S. Amateur and claiming the McCormack Medal as the world’s No. 1 amateur, Fitzpatrick is exempt into the year’s first three majors.

The 19-year-old, who was the low amateur at last summer’s British Open, is taking a wait-and-see approach with his pro decision. He intends to use all three major exemptions because, he said, it’s “probably the right thing to do, potentially once in a lifetime.” He’s also scheduled to play in the RBC Heritage, AT&T National, Scottish Open and possibly the Travelers. Those opportunities “will let me see where I am in comparison to those guys, really, see whether I can compete or not,” he said.

Fitzpatrick has played practice rounds with Lee Westwood and spoken at length with fellow Englishman Ian Poulter. On Thursday morning, he met Justin Rose for the first time as he walked to the range.

“It’s been quite surreal this week,” he said, “in that people who I almost expected them to forget who I was, really, and they were saying hi.”

Fitzpatrick will head to Augusta National for the first time next week and play 36 holes per day on Tuesday, Thursday and Saturday. After that, he will compete in the Georgia Cup before teeing it up in the Masters.