Kaymer in contention to win second PGA at Whistling 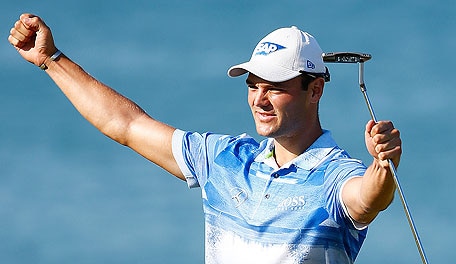 SHEBOYGAN, Wis. – It’s different this time. There are the obvious reasons. He’s now a major champion, two-fold. He’s a Players champion. He’s a former world No. 1 and a Ryder Cup hero.

But there is something Martin Kaymer knows now that he didn’t know back then.

“The funny thing is that you think he's won two or three majors here or there and he knows how to handle (the last) three or four holes. But every situation is so different. Because every time you play a different golf course, you play against someone different, and you can't really prepare for it,” Kaymer said.

Welcome back to the unknown, Martin Kaymer.

Thanks to a 7-under 65 Saturday, Kaymer is in contention to win a third major championship and a second Wanamaker trophy at Whistling Straits.

Kaymer trailed by four strokes through 54 holes five years ago at this event. He was tied with two players, three more in front. This time around, he trails by four shots; with four players ahead of him.

"I’m just glad that I put myself in a position to maybe have a chance tomorrow," Kaymer said. "The last round, so much can happen."

And that’s what Kaymer now understands. That a resume will not reduce shots on Sunday. That he is as susceptible to nerves as every other player, decorated or otherwise.

And it’s all that experience and success that Kaymer will use to embolden his bid for a second comeback victory in as many tries at Whistling Straits.

Duplicating his third-round performance will be difficult. Kaymer said he and playing competitor Branden Grace fed off of one another, not willing to let the other pull ahead. Grace nipped him by a stroke with a bunker hole-out at the last.

“It's a funny feeling when you play with someone that is playing as great as I played today, even better on a lot of the other holes,” Kaymer said.

“I never thought about when people always say, is it nice to play with someone who is playing great or is it more difficult because you always feel like you're one behind? But today was one of those things you really don't want to lose too many shots. You keep going, you keep going, and that's what Branden and me did today.”

Kaymer defeated Bubba Watson in a three-hole aggregate playoff in 2010. But as Kaymer lamented in his pre-championship news conference, the primary focus was on Dustin Johnson’s bunker gaffe.

“If I would win again, hopefully in a more regular way that there’s not much happening on the 18th hole,” Kaymer said.

He’ll just have to make up four shots, hope no one ahead of him outplays him, and handle the unknown.

Five years ago, Kaymer thought a man with multiple majors would be at ease in his current position. “Just a daily business, on a little bit higher scale," he figured. The situation, the victory, the spoils - it's huge for those who haven't experienced it all.

But now he understands.