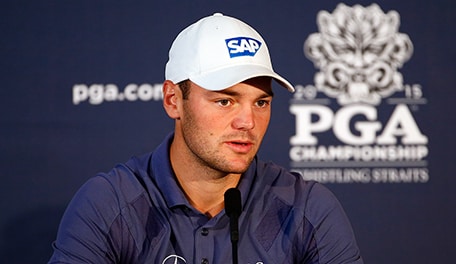 SHEBOYGAN, Wis. – Martin Kaymer won the 2010 PGA Championship at Whistling Straits. He’d like you to remember that.

No one will forget the Dustin Johnson incident of five years ago, in which he was penalized two strokes for grounding his club in a bunker on the 72nd hole and missed out on a playoff.

But, Kaymer would like to remind you: What happened to Johnson doesn’t mean it cost him an assured victory.

“It’s little sad that every time we talk about the PGA Championship here it’s like Dustin threw it away,” Kaymer said on Wednesday. “It’s always a little bit that everybody still thinks that he would have won the tournament outright.

Johnson led by one stroke entering the final hole before making, what he thought was, a bogey. He was deemed to have grounded his club in a hazard, however, and the penalty dropped him into a tie for fifth. Kaymer went on to defeat Bubba Watson by one shot in a three-hole aggregate session.

The major triumph was a surprise for even Kaymer. He began the final round four off the lead and was hoping to just play his way onto the European Ryder Cup team. A closing 2-under 70 accomplished that goal. And then the pieces fell into place for a playoff. Rory McIlroy couldn’t match Kaymer’s 11-under total. Watson bogeyed the last to drop from 12 to 11 under. And then, at the end of regulation, there was the Johnson mishap.

A little while later, after Watson dumped one in the water on the third extra hole, Kaymer was the victor. And life as a major champion – and newly crowned world No. 1 – began. Kaymer reiterated on Wednesday that he didn’t handle that time on top very well. In simplest terms, he allowed others to dictate his actions.

“I followed a lot of people, what they said, what I should do, what I'm supposed to say in interviews, to what kind of shows I'm supposed to go to, and I lost a little focus of the game, because obviously I was playing good golf,” Kaymer said.

“When you win a major then you become the No. 1 in the world, you get a lot more attention and you need to adjust a lot as a person. For me it was, I needed to adjust very quickly to things that I didn't really want to adjust to but you have to.”

Fortunately for Kaymer, he got a second chance, winning major No. 2 last year at the U.S. Open. He hasn’t since won and has only one top-10 finish worldwide since the start of February. He attributes these recent struggles to a Masters obsession gone wrong.

“The beginning of the season … was all about the Masters. And I did so much, probably way too much practice, too much in the gym, too much focus on only one tournament and then didn't perform the way I wanted because I was going into the Masters a little bit tired already from that much practice, because I really wanted it really bad,” said Kaymer, who missed the cut at Augusta.

“It was just very, very frustrating. Very disappointing that I couldn't play the rounds that I wished for. It took me probably five, six weeks to get over it, really, and to be OK with it and focus again on the upcoming tournaments. And the last few weeks I played really good golf. The score didn't really reflect it, but sooner or later it will.”