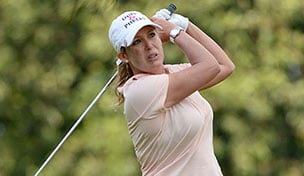 Getty Images
SAMMAMISH, WA - JUNE 09: Ha Na Jang of South Korea waits on the 13th hole during the first round of the KPMG Women's PGA Championship at the Sahalee Country Club on June 9, 2016 in Sammamish, Washington. (Photo by Scott Halleran/Getty Images for KPMG)  -

PHOENIX – It was already an eventful week for Cristie Kerr before she even hit her first tee shot Thursday at the JTBC Founders Cup.

On Wednesday night, Kerr introduced her three-month old son, Mason Kerr Stevens, to fellow LPGA pros at the Founders Cup. She has a home in the Phoenix area, and it’s the first time she has been able to bring her son to a tournament.

Later that night, Kerr announced at a Curvature Wine tasting party that the Bob & Renee Parsons Foundation will match Kerr’s LPGA money winnings this year in a donation to the Semper Fi Fund, which helps injured and critically ill military service members and their families.

Kerr will be expanding her wine interest later this year. She’s planning to release a new Cristie Kerr wine label late this summer.

Wednesday’s events were a soothing tonic for Kerr’s Tuesday adventure. She was beaned by Stacy Lewis in a practice round, with one of Lewis’ bunker shots going long and clunking Kerr in the head. She was fine after applying a little ice.