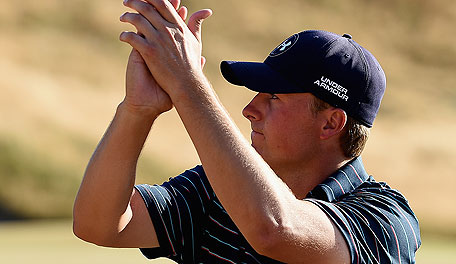 Jordan Spieth captured his second straight major after Dustin Johnson three-putted the 18th green. Here's a look at some key stats on the final round of the U.S. Open provided by Golf Channel's editorial research unit.

• Jordan Spieth: At age 21, youngest to win Masters and U.S. Open in career

• Previous youngest to do it – Jack Nicklaus at age 23

• Youngest to win second major since Gene Sarazen in 1922

• Only three-time winner on PGA Tour this season

• 18 birdies this week, tied for most in field

• 18 birdies this week, tied for most in field

• Fourth time in final pairing in a major (0 wins)

• Adam Scott: bogey-free 64; one shot off lowest final round in U.S. Open history

• Eighth top-5 finish in a major championship (seventh since 2011)

• Did not make a bogey over last 23 holes of tournament

• Charl Schwartzel: Played last 14 holes in 6 under to finish seventh