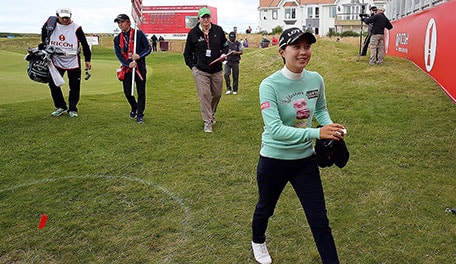 Kim, who just turned 20, got off to a quick start again Thursday at the Ricoh Women’s British Open with a 7-under-par 65 at Trump Turnberry. She’s one shot ahead of Lydia Ko and Cristie Kerr and two ahead of So Yeon Ryu and Q Baek.

Kim’s among this new wave of young South Koreans taking the LPGA by storm. In Gee Chun, 20, won the U.S. Women’s Open last month. Sei Young Kim, 22, was in the final Sunday pairing in the final round of the first two majors of the year, tying for fourth at the ANA Inspiration and finishing second at the KPMG Women’s PGA Championship. Already stars on the Korean LPGA Tour, this new young wave hit the LPGA unafraid of big stages.

Kim was so focused on playing Thursday at Trump Turnberry, she didn’t know she led until she reached scoring.