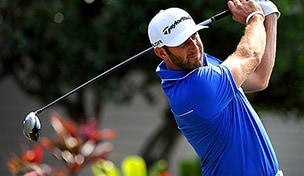 Getty Images
AUCHTERARDER, SCOTLAND - SEPTEMBER 27: Jordan Spieth of the United States celebrates a putt on the 10th hole during the Morning Fourballs of the 2014 Ryder Cup on the PGA Centenary course at the Gleneagles Hotel on September 27, 2014 in Auchterarder, Scotland. (Photo by Mike Ehrmann/Getty Images)  -

Each week on GolfChannel.com, we’ll take a detailed look at the players who pounded the farthest and fastest drives on the PGA Tour. Here are the five most important distance-related statistics from the AT&T Pebble Beach National Pro-Am, won by Jimmy Walker:

The big bopper makes his first appearance in this category this season, although he finished in a tie for 27th at Pebble Beach. In the cold, wet air, Garrigus’ long drive was one of the shortest this season. This longest this year was Webb Simpson’s 397-yarder at Kapalua, which was undoubtedly helped by the hilly terrain on the island.

DJ exudes confidence when he steps on to the property, and he bashed away again last week at Pebble Beach, where he tied for second. In six career starts in this event, Johnson has two wins and two other top-10s. (He also held the 54-hole lead at the 2010 U.S. Open there.) DJ led this category at Kapalua, where he paced the field with a 297-yard average.

Johnson’s big blast was even more impressive when considering the cool, damp conditions in which he was playing. That carry distance was the longest of the season, even longer than Bubba Watson’s total a week ago.

Johnson also topped this category for the first time. His clubhead speed compared well with many of the other previous leaders this season – each of the previous four chart-toppers were above 123 mph.

No surprise, Johnson also topped this category as he nearly completed the clean sweep. He was markedly slower than Bubba Watson, the leader the last two events, who topped 183 mph in ball speed.