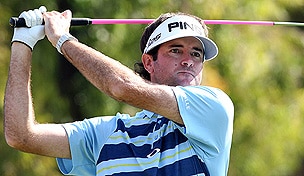 Getty Images
Retief Goosen of South Africa (L) and Justin Rose of England walk off the first tee during the final round of the 144th Open Championship at The Old Course on July 20, 2015 in St Andrews, Scotland. (Photo by Richard Heathcote/R&A/R&A via Getty Images)  -

Each week on GolfChannel.com, we’ll take a detailed look at the players who pounded the farthest and fastest drives on the PGA Tour. Here are the five most important distance-related stats from the Northern Trust Open, won by Bubba Watson:

This is the first time this season that Watson has led this category, taking advantage of the firm-and-fast conditions last week at Riviera. The longest this season is Pat Perez’s 382-yard bomb at TPC Scottsdale.

Bubba topped this category for the third time in the past four weeks. This year, the player who has led this category has won twice (Jimmy Walker, Sony Open) and finished second twice.

Watson also topped this category for the third time in the past four weeks, though his carry distance wasn’t quite as far as his season best, a 317.4-yarder in the dry air in Phoenix. Dustin Johnson’s 319-yarder a week ago is the distance to beat.

Watson led this group for the third time in the past four weeks with a season-best total, topping the previous mark of 123.87 mph, set by Charlie Beljan at the Humana Challenge.

No surprise, Watson also led this category for the third time in the past four weeks. It was the highest ball speed of the season, beating the previous best, his 183.90 mph mark in Phoenix. It was more than 4 ½ mph faster than Johnson’s ball speed a week ago in Pebble.