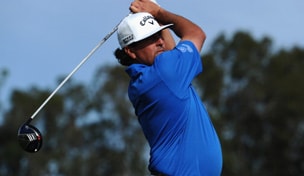 Each week on GolfChannel.com, we’ll take a detailed look at the players who pounded the farthest and fastest drives on the PGA Tour. Here are the five most important distance-related statistics from the Waste Management Phoenix Open, won by Kevin Stadler:

Perez’s big blast came on the 470-yard eighth hole at TPC Scottsdale. The 37-year-old, who finished T-2 at Torrey Pines, was in the hunt again in Phoenix before a 70-71 weekend dropped him six shots off the pace.

Watson could bomb away in the Arizona desert, and he nearly walked away with his first PGA Tour title since the 2012 Masters. Instead, he finished in a tie for second, one shot behind winner Stadler.

It’s the second week in a row that Watson topped this category, and represented the longest carry distance of the season.

The free-swinging left-hander also led this category for the second week in a row. He checked in only slightly behind the fastest of the year – Charlie Beljan’s 123.87 mph swing at PGA West.

No surprise, Bubba also finished atop this category, too, for the second week in a row.