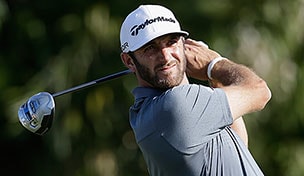 Getty Images
ORLANDO, FL - MARCH 20: Jason Day of Australia kisses his daughter Lucy with son Dash and wife Ellie following his one stroke victory on the 18th hole green during the final round of the Arnold Palmer Invitational presented by MasterCard at Bay Hill Club and Lodge on March 20, 2016 in Orlando, Florida. (Photo by Keyur Khamar/PGA TOUR)  -

Each week on GolfChannel.com, we’ll take a detailed look at the players who pounded the farthest and fastest drives on the PGA Tour. Here are the five most important distance-related statistics from the WGC-Cadillac Championship at Doral, won by Patrick Reed:

The South African’s big blast came on the par-4 fifth hole in the second round at Doral, where he eventually finished T-40. This was the longest drive on the PGA Tour since Webb Simpson’s 397-yarder at Kapalua.

DJ finished T-4 at Doral, continuing his recent surge. In his last six stroke-play events on the PGA Tour, dating to last year, he has not finished outside the top 6. The leader in this category has finished in the top 5 in each of the past five events.

Johnson also topped this category for the second time this season, though his carry distance fell short of the 319.5-yard bomb he hit at Pebble.

Watson tied for second at Doral, his fourth consecutive top-10 finish on Tour. He topped this category for the fourth time, and this was his highest swing speed of the season.

No surprise, Watson also topped this category for the fourth time this season. This ball speed, however, was slightly lower than his highest this season (184.30 mph at Riviera).