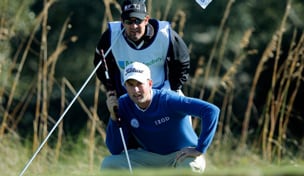 Getty Images
Not only is the 1999 U.S. Open at Pinehurst No. 2 regarded as one of the most exciting Opens ever, it also had compelling off-course storylines. One concerned Mickelson and his wife, Amy, as they were expecting their first child sometime that week. In the final round, it was a battle between Mickelson and Payne Stewart, who at No. 18 sank a 15-foot par putt to nip Mickelson by a stroke. Stewart fist-pumped in celebration, then embraced Mickelson and told him, “You're going to be a father, and there's nothing greater in the world.” (Getty)  -

Scoring conditions were tougher on Friday thanks to strong winds, but several players were still able to go low in the second round of The McGladrey Classic. Here’s how things shape up after two days at Sea Island, where play was suspended because of darkness:

What it means: The fog stayed away on Friday, but the breeze kicked up making scoring conditions much tougher at Sea Island. Due to a fog delay Thursday, not everyone was able to get in their second rounds. Keep an eye on Seung-Yul Noh, who is three shots off the lead with four holes to go when play resumes on Saturday morning.

Round of the day: Despite opening with a bogey, long-hitting Jason Kokrak recorded the lowest round of the day, a five-under 65. Starting on No. 10, Kokrak shook off his lone bogey with an eagle on the par-5 15th, plus four more birdies coming in to finish at -6, two shots off the lead.

Best of the rest: Thanks to a late bogey by Simpson, Kirk was able to finish the day with the lead after a second-straight 66. Kirk's round included an impressive six birdies and only two bogeys.

Biggest disappointment: They say it's always tough to follow up a really low round, and George McNeill proved that notion once again on Friday. Coming off an 8-under 62, McNeill managed only one birdie against seven bogeys on Friday for a 6-over 76.

Biggest storyline heading into Saturday: Having already won in Las Vegas, Simpson has a chance to add another title to his resume before the calendar hits 2014. A late bogey cost Simpson a share of the lead, but he's clearly the favorite heading into the weekend. Given his hot-hand and major-championship experience, Simpson is the most battle-tested player near the lead. But keep an eye on Sea Island resident Matt Kuchar, who is only four shots back.