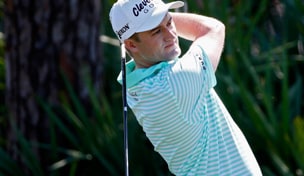 Getty Images
''Seems like this could be the tournament that I just can't quite master,.” – after finishing third in Abu Dhabi, where he also has four runner-up finishes  -

PALM BEACH GARDENS, Fla. – A second-round 63 put Russell Knox on the leaderboard at the Honda Classic. A third-round 68 amid blustery conditions kept him there.

Knox carded four birdies against just two bogeys Saturday at PGA National. At 9-under 201, the 28-year-old will enter the final round alone in third place, three shots behind Rory McIlroy and in position for a career-best finish on the PGA Tour.

“I would have taken 68 before I teed off probably,” said Knox. “It was windy. It was tough out there, and greens were fast. No, I’m thrilled.”

The Scot tied for 10th earlier this season at the Farmers Insurance Open, and his best finish on Tour was a tie for ninth, which he accomplished twice in 2012. With a spot in the penultimate pairing awaiting him Sunday afternoon, Knox tried to keep things in perspective following a round in which he found 12 of 14 fairways.

“I have a great chance tomorrow,” he explained. “I mean, I don’t need to win this tournament to leave being happy.

“If my day is tomorrow, then so be it, but I’m just looking forward to going out there and walking tall and playing as well as I can,” added Knox. “If something great happens, that’s a bonus.”