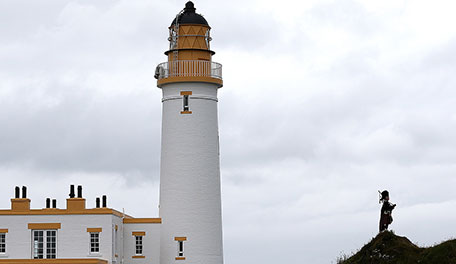 TURNBERRY, Scotland – The Ricoh Women’s British Open will be played at Trump Turnberry for just the second time in the event’s 39-year history. Karrie Webb won it the first time it was played on the course in 2002.

Here are five groups to watch (all times ET):

Ko, 18, is playing the Women’s British Open for just the fourth time. Her best finish in the championship came in her first appearances as an amateur in 2012, when she tied for 17th at Royal Liverpool. She was T-42 and T-29 in her other two appearances. Lincicome is going for her second major of the year after winning the ANA Inspiration in the spring. Miyazato is looking for her first major championship title.

Wie is still playing hurt, but she put up a good showing in her title defense finishing 11th at the U.S. Women’s Open despite limping through pain in her left hip, knee and foot. She called playing Turnberry one of her “bucket list” wishes. Davies was just inducted into the World Golf Hall of Fame, and if she wins this week, she’ll qualify for the LPGA Hall of Fame. She needs 27 points to make it into the LPGA Hall and she’s been stuck on 25 since her last LPGA victory in 2001. A major title is worth two points. Miyazato has struggled the past couple seasons and didn’t even qualify to play the U.S. Women’s Open last month.

Martin is the defending champion. She loves playing in the wind, and she should see plenty of it this week on the rugged coast of South Ayrshire. Martin’s trying to make the U.S. Solheim Cup team and is paired with two other players fighting to make the team. Piller holds down the eighth and final spot on the U.S. points list. Martin and Korda are both fighting to crack the team with just three events left to qualify.

Webb has won the Women’s British Open three times, once after it was designated a major. Chun comes in hot having won the U.S. Women’s Open three weeks ago and a Korean LPGA Tour event last week. Hall is an LET rookie from England. She won the British Ladies Amateur in 2013.