Ko, Wie paired together in Arkansas 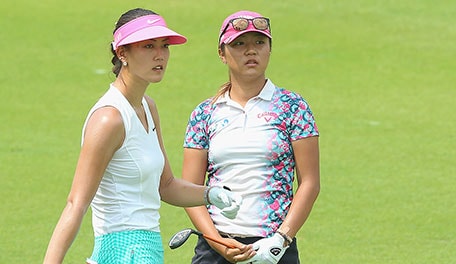 Stacy Lewis will defend her title as the LPGA returns to action with the 54-hole Walmart NW Arkansas Championship beginning Friday. A University of Arkansas graduate, Lewis will be the overwhelming crowd favorite again at Pinnacle Country Club in Rogers, Ark. Lewis’ last LPGA victory came in this event a year ago. Eight of the top 10 players in the Rolex Women’s World Rankings are in the field. Here are four groups to watch in the first round (all times ET):

Pettersen arrives in strong form having won the Manulife Classic just three weeks ago. Creamer righted a rough patch in the spring with a T-5 finish at the Kingsmill Championship last month, just her second top-10 finish this season. The rookie Lee won her first LPGA title at Kingsmill.

Ko will tee it up for the first time since missing her first cut in an LPGA event two weeks ago at the KPMG Women’s PGA Championship. She saw her perfect 53-0 record in cuts made end there. Ko’s 19-week reign as Rolex world No. 1 also ended after that missed the cut. She tied for second in Arkansas a year ago. Munoz is looking to continue to rebound from hand surgery and get her game ready for the final three majors of the year and the Solheim Cup in September. Wie will make her last start before defending her title at the U.S. Women’s Open in Lancaster (Pa.) Country Club in two weeks. She’s been battling a hip injury.

Park makes her first start since she recaptured the Rolex world No. 1 ranking by winning the KPMG Women’s PGA Championship two weeks ago, the sixth major championship title of her career. Nordqvist won the ShopRite Classic earlier this month and Thompson is coming off a third-place finish at the KPMG Women’s PGA. Thompson has finished T-10 or better in five of her last seven starts.

Lewis will get a lot of love in Arkansas, where she played collegiately and is a member of the school’s Hall of Fame. She came from two shots behind Wie in the final round to win this event a year ago, making birdies on three of the last four holes. Gal is coming off a 12th place finish at the KPMG Women’s PGA and looking to mount some summer momentum going into the Solheim Cup in her native Germany in the fall. Uribe made a nice run at winning the Manulife Classic earlier this month before finishing third.